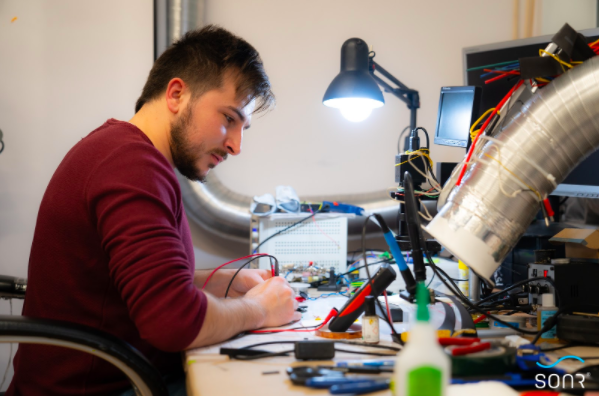 They say never meet your heroes. We say - why not? Let’s talk about hardware today and the people who are behind it. Let’s call them the Fantastic Three. Each one of them being smart, funny, and just a little bit geeky. Full disclosure: in case you did not know our team is from Eastern Europe so you will see a lot of unknown names today, but let them not bother you because what matters is their talent and hard work.

Sergiu Speian - the mastermind behind the Sonr’s scheme. The one who started it all when it comes to hardware. He is pretty much multitasking like a pro. From organizing the placement of components, electronic schemes development, components storage to purchasing all these components, and taking care of them like a dad takes care of his beloved kids.

Sergiu is well known among his colleagues as the “chief debater with programmers”. He has his reasons don’t judge him.

As for the projects he took part in. Oof. Buckle up because there were a lot of them. One of the first ones was Nitrate tester. Sergiu claims it was so cool it could predict the weather on Mars. OK, Elon Mask - calm down.

One of the coolest projects Sergiu worked on was the Endocapsule for the diagnosis of internal organs. He took care of the schemes, prototypes, boards, models, cameras, batteries, and a lot of other things we - simple mortals have no idea of.

The crown jewel of his work (after Sonr of course) would be a device for testing jet turbine blades. A very interesting and high-tech topic. They were not told for what engines they made these devices for, but if you google the Russian PAK FA airplane you would be very surprised to know that Sergiu was a part of that project. But shh, it’s a secret.

Moving on to the person with the biggest experience in the team in RF (radio frequency) engineering: Vladislav Crivobocenco. If the average person watches the TV from the front, Vlad knows the back of it like the back of his hand. One of his successful projects would be the Hotbox - a professional oven for food delivery. He worked on a device for maintaining the right temperature for food as well as on an antenna for a GPS tracker and GSM module.

Ever heard of side camera mirror system? Yup. Vlad was part of such a project too. The advantages of a camera system are that you have no problem driving during rain, or while it’s snowing. Also, you could see in the dark because the camera had a night vision mode. Some spy technology if you ask me.

Since the antenna would have been the most expensive part of Sonr, it was decided later on to create our own antenna. Vlad took care of it. He had to switch from an antenna as a radio component and move it to an internal one. Vlad adjusted the measuring equipment along with the input parts, receiver, filter, amplifier etc. It was hard but in the end, it was totally worth it: 50 meters on the water, 200 meters on the land and up to 1 meter underwater signal. Not bad, huh?

The last hero of our story is Eugen Jomir - the youngest hardware engineer/programmer. Eugen is known for his love of planes. He likes to refer to himself as a “test-pilot”. Although he is testing only small planes created by himself - we believe one day Eugen will construct his own life-sized plane. He even worked with Sergiu on a stabilization system for an aircraft. Since he is the youngest member of the team and graduated from the university not long ago - he does not have many projects to brag about like the previous guys, but what he has is a passion for what he does and is unstoppable when he’s driven by it. As part of the Sonr project, he contributed to the creation of the LED indication and also helped Vlad with the development of the antenna. His strong suit is the electronic schematics, wiring, assembling components, and diagnostics. So whenever you turn the Sonr on, know that Eugen was the one working on those LEDs indicators which will let you know about many functions Sonr has. But this is a whole other story.

You will find out more about our team members in the next weeks. Stay tuned.