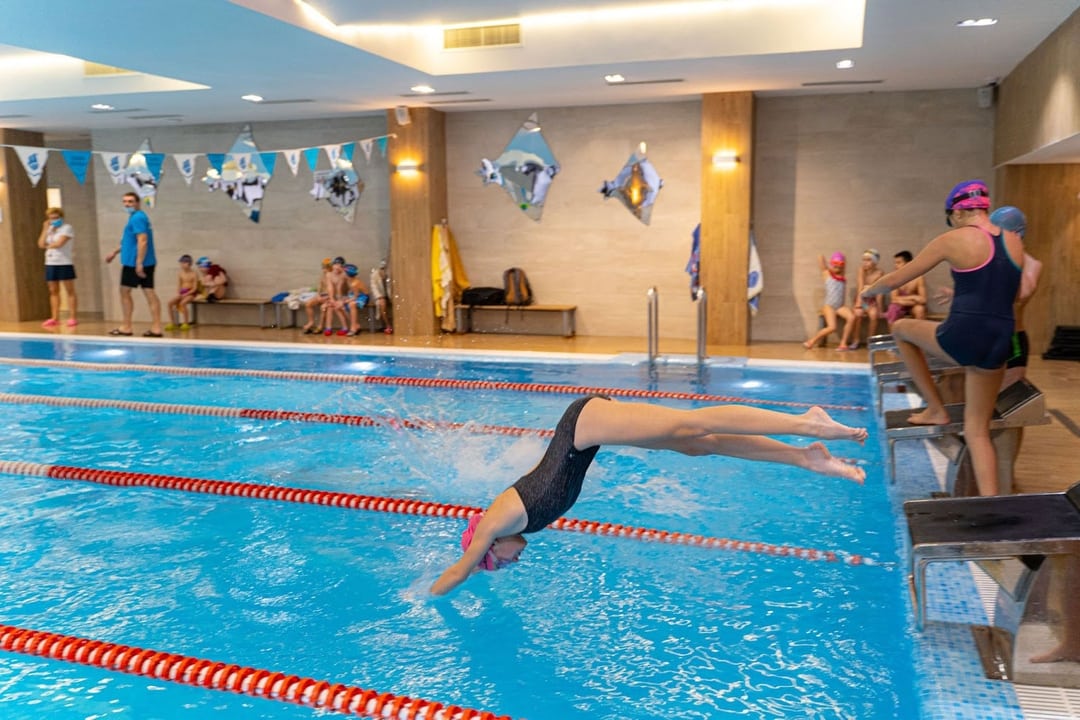 Stages of a great start in swimming: top 5 advice

The start is a part of the swimming process when the athlete reaches the highest speed for the entire distance due to a strong push.

Making it and jumping into the water right while performing crawl and butterfly styles, greatly affects your result. The correct technique not only allows you to set the maximum acceleration but also provides the best glide and sets the necessary pace.

Today athletes perform swimming start from starting block. Before the whistle, any movements are prohibited: hands, head, or feet - as they can be regarded as a false start.

There are several phases in the start technique:

- entrance to the water

- exit to the water surface

To improve it, try to reduce the duration of all phases and optimize them. At high-level competitions, athletes practice only two of all the above methods: starting with a forward swing and starting with grabbing the edge of the platform.

Let's consider step by step the sequence of actions of the traditional approach:

The legs are the width of the hip joints, the feet are parallel, the toes grab the front edge of the platform. The knee joints are slightly bent, the angle between the hip and the shin is 150°. The body is horizontal, the head is slightly raised. Straight arms are pulled back, forearms are at the level of the hip joints or slightly lower. The muscles are minimally strained to maintain the pose.

The legs bend at the knee joints, the torso moves forward, the swing of the arms begins down-forward-up. The swimmer rises on his toes, takes a breath. Remember, the start dive is something that could help you win on the track.

The preparatory movements turn into a push at the moment when the angle between the thigh and the shin reaches 90 °. At this time, the hands approach the vertical position relative to the horizon. The starter stretches his legs with a powerful effort, accompanying the push with a wave of his hands forward and upward.

Legs, torso, and arms are stretched out in a straight line. The head is between the arms, the palms facing down are connected. At the beginning of the flight, the inhalation ends and the flight itself takes place on a breath-hold.

Legs, torso, and arms are stretched out (so that the pose does not change at the moment of entering the water, you should narrow your shoulders and slightly tighten your muscles).

Gliding occurs at a depth of 70-110 cm. The body is straightened, the shoulders are narrowed, the arms are stretched forward, the hands are together.

Swimming movements should begin when the rate approaches the speed of swimming, approximately when the feet move away from the starting point by 3.5-4 m. The task of the first swimming movements is to maintain speed and lift the body. When swimming in different styles, these movements are different.

Let's take a closer look at the technique of starting with the grabbing of the platform edge:

The athlete leans forward and down, grabs the front edge with his fingers. The degree of leg flexion in the hip and knee joint is individual. The position of the brushes is also individual.

After hearing the starting signal, the swimmer vigorously presses his fingers and palms on the edge of the start block, bends his legs at the knee joints, and quickly pushes off.

The swimmer takes his hands off and performs a quick forward swing with his hands. At the same time, the legs and body straighten in a jumping motion forward and slightly upward.

Flying, entering the water, and sliding

The flight phase is short. Entering the water is at a sharper angle, and sliding is at a lower depth.

The advantage of the start technique with the platform is that the swimmer's reaction to the signal, preparatory movements, and push proceed faster. However, it loses to the traditional start in flight range and gliding, where the preparatory movements are performed with full amplitude. Currently, professionals prefer track start.

Which option is optimal for a particular swimmer is determined empirically.